I am an extremely impatient person.

Oh sure, I pay lip service to the importance of process, to letting life and art and healing unfold in their own magical timing. But like so many things I believe in and recommend to other people, I feel somehow exempt from allowing that truth into my own life.

I want the learning experience behind me, the knowledge and growth safely implanted in my head. I want my artwork to be finished, polished, and ready to share with the world. I want my challenges accomplished, the stories of their unfolding ready to turn into pithy anecdotes.

I’m very good at starting things, pretty good at ending them, but squirrely, angry, and itchy about their middles.

Just about the only place where I can embrace being in the middle of anything, actually, is when I’m physically in motion—most especially in a car.

My family never flew anywhere when we went on vacation. There was no reason for it. We couldn’t afford expensive or luxurious trips to exotic places (like, say, the East or West Coasts), and anyway, why would we need to go anywhere so far away? Where, outside the Midwest, would my dad even want to take us?

A deeply sentimental man, he was capable of feeling nostalgic about something he may have done that morning before breakfast, so unsurprisingly he invested the locations of our previous vacations with a nearly mystical reverence. Their repetition always had something of a fated quality. “Let’s do the things we used to do. Let’s go to the places we used to go to.” The highways of Indiana, lower Michigan, and western Ohio became a rosary that we would make endless loops around, their deeply ingrained familiarity a comfort to me even now so many years later. 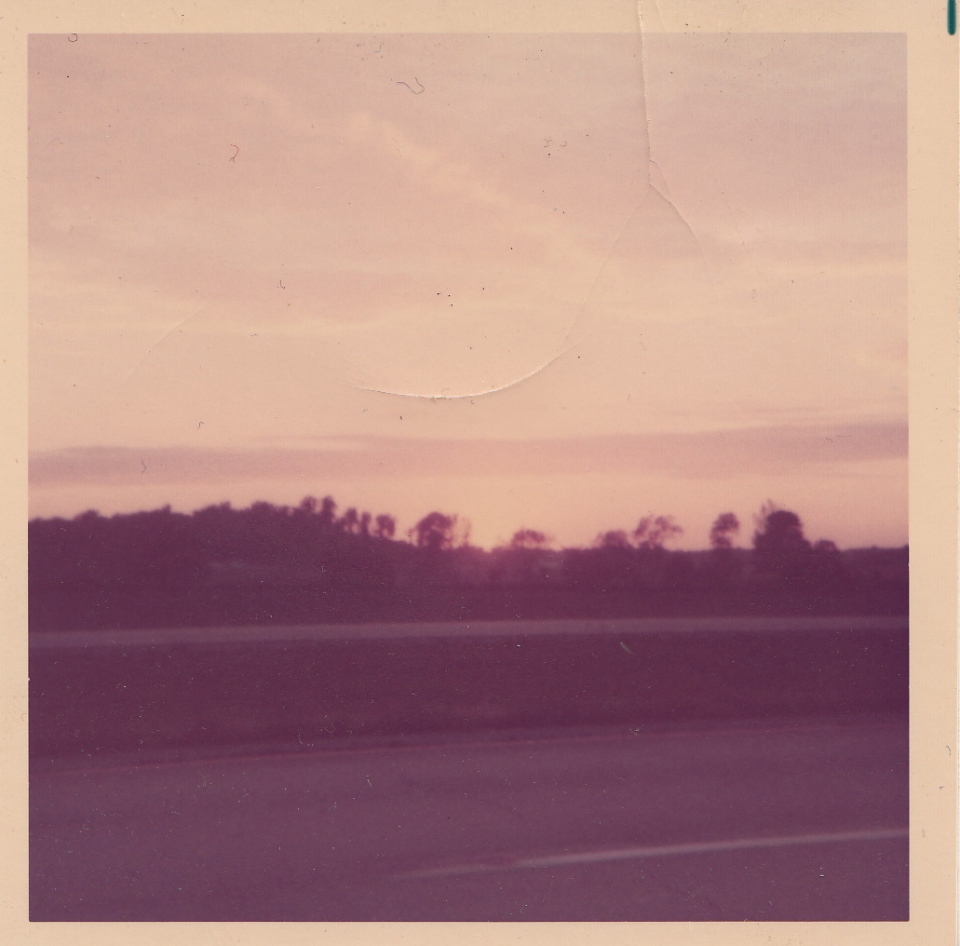 In the late ’70s and early ’80s, we traveled in a brown, boxy full-sized van that my dad also used to haul his musical equipment to gigs in. It had a driver’s seat and a passenger’s seat up front, a U-shaped bench seat in the back, and a seemingly cavernous expanse between them. When not filled with his PA system and other gear, that’s where we’d throw our duffel bags and ancillary belongings before we hit the road.

There was also a square plank of wood that could be inserted into the cut-out portion of the U bench, with two rectangular cushions to cover it, to make a flat bed—a convenience for traveling with small children who needed to nap or have their diapers changed. 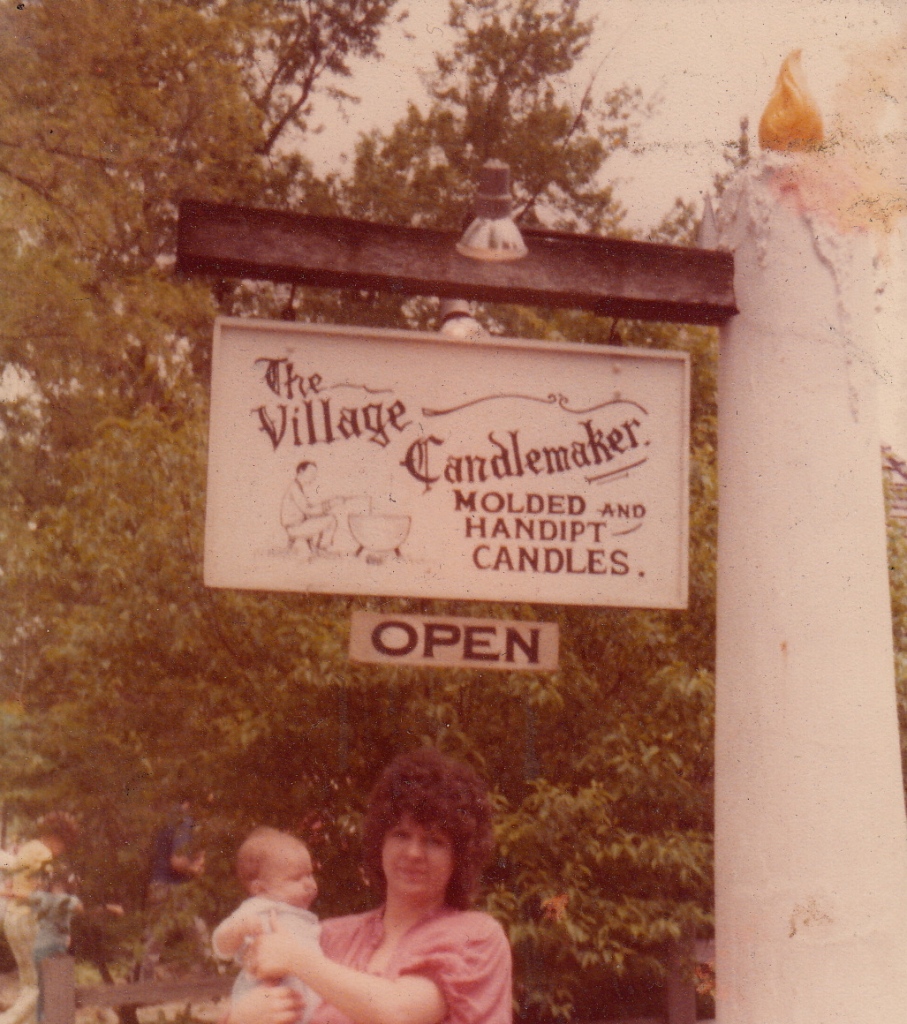 This plank also, inadvertently, created a small cave underneath. At some point my dad realized this and learned to tuck a lightweight blanket at the end of the makeshift bed, creating an incredibly enticing hiding space for little bodies to curl up inside.

So, as a small child, for vast portions of our road trips, I would crawl into this cave and lay my head against the pungent rubber of the floor and listen to the hum of the road underneath us, feeling the soothing vibrations of the chassis flying along at top speed down the highway.

Lulled by the steady rumble of the road, I was left to bask in my own interiority. What did I think about or dream about or conceive of while I was in my little hermit’s cave? I don’t really remember. But what I do recall is the desire to return—the excitement that would bubble up inside me when we were leaving on another trip and I knew I’d get the chance to disappear into my favorite little place again. 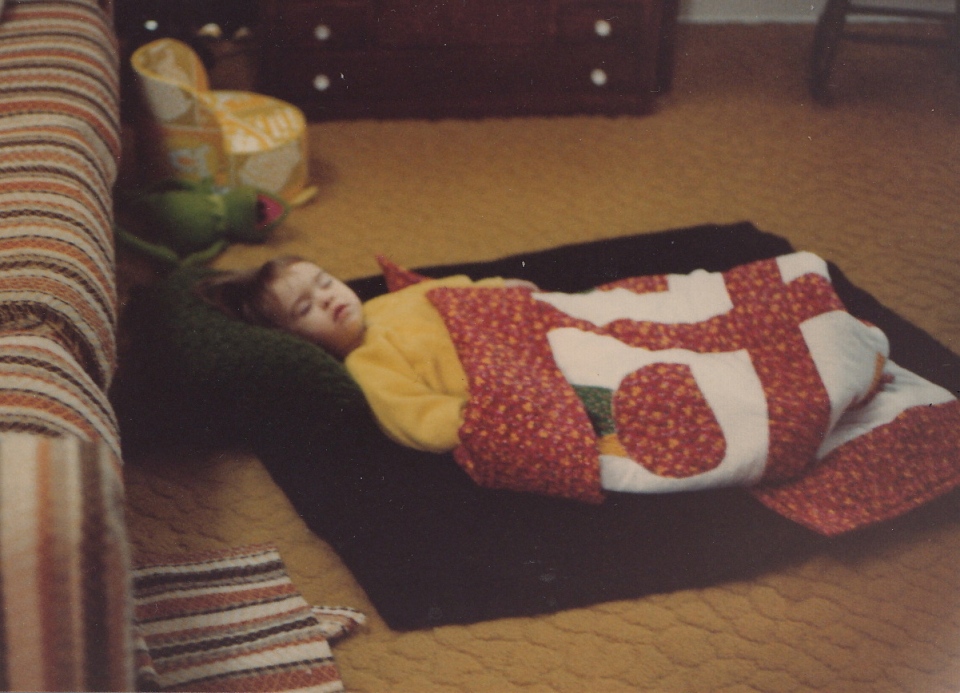 In later years, I of course not only physically outgrew the ability to fit in that small space but also outgrew the child’s privilege of not having to give a fuck about anybody’s happiness but my own. After my mother died, there was an unspoken understanding that I was expected to take her place as my father’s confidante and copilot. My siblings and I argued about who would get to sit in the front seat, like all siblings do, but it defaulted to me more often than not. (I was kind of snotty enough to assume I just inherently deserved it since, after all, I was now saddled with so much unwanted emotional responsibility. Like any asshole first child, I can get very rigid about pecking-order dynamics, especially when they’re set up to work in my favor.) The front seat brought pleasures of its own—watching the world fly by through the front windows, listening to and talking about music with my dad, kicking my feet up on the dashboard, being the first to see what was coming at us around the next bend in the road.

It was from that vantage point that I learned to love the small, temporary societies that emerged within the confines of a moving vehicle. I saw that it was possible for a whole world to be created in a car when you were settled in for a drive of any significant length. A cozy, often mute togetherness would descend, uniting the travelers, even when already genetically related, in a bond of deep care. 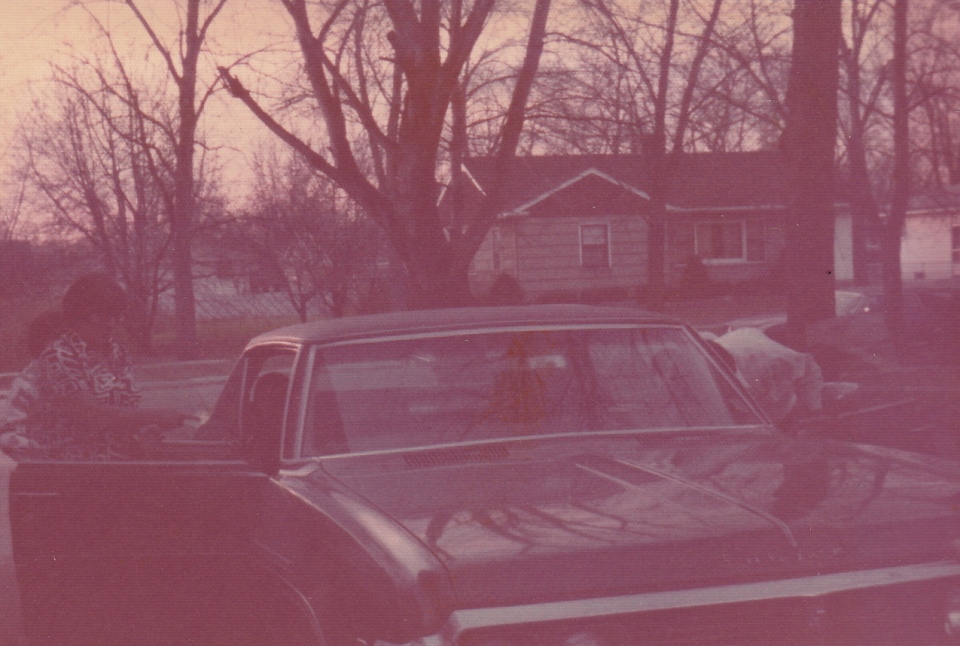 And it was more than just an acknowledgement that, yes, we’re all stuck here together until we get where we’re going. Despite the fact that we were very visibly traveling through a specific landscape, making progress that could be tracked on a map, there was also a feeling, oddly, of stasis. Being confined to the car, especially in those days before smart phones and GPS, actually kind of paradoxically made the world disappear. It was like the weird emotional truth of disaster movies—the people you were stuck with in these small spaces became your allies in a deeper, more intimate way than you usually had access to during the humdrum routines of everyday life.

Handing a bottle of water or a granola bar across the length of the vehicle to one of your fellow travelers took on a delicate intimacy that felt more like true generosity, honoring someone’s very human, immediate hunger or thirst. Because, after all, when are you ever more conscious of other people’s bodies in space and time than when you’re stuck in a somewhat cramped space with them? I think that’s part of what also makes a road trip feel like this tribal journey; you’re all literally, physically heading in the same direction, as a unit, everyone privy to each individual’s snores and farts and motion sickness and smelly feet as part of your unignorable collective experience. 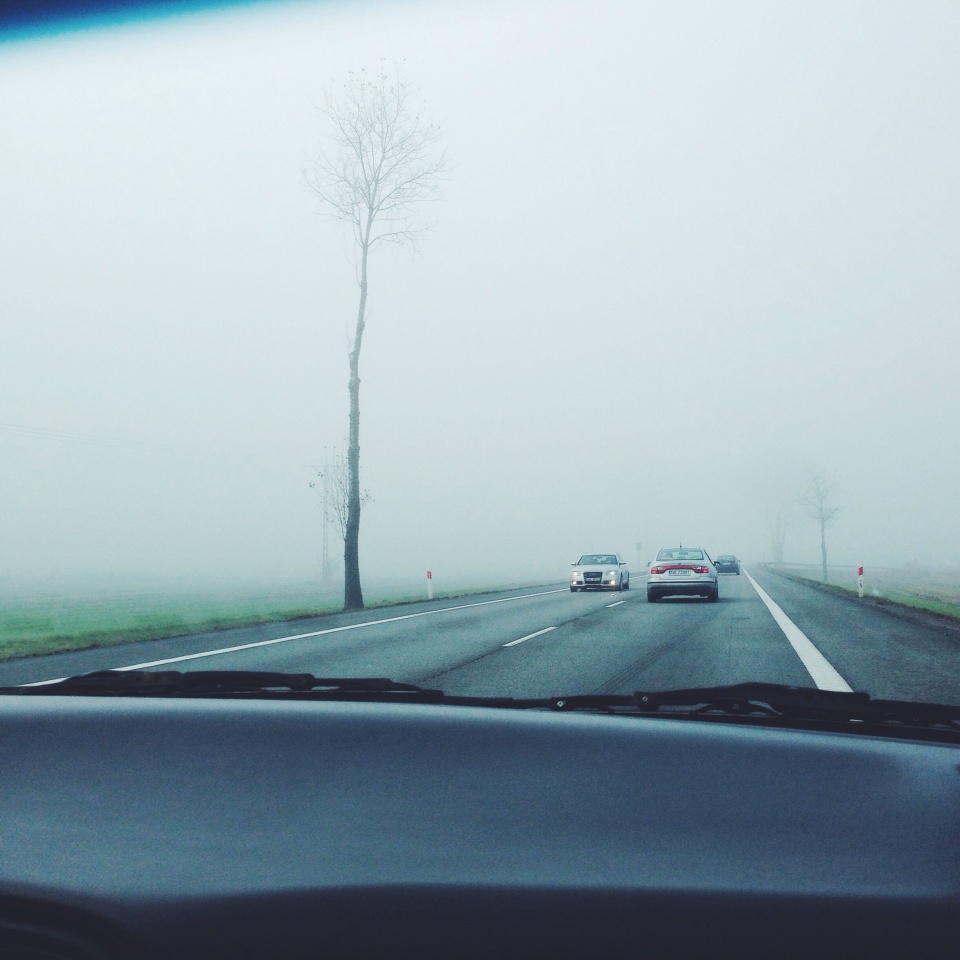 I got my own driver’s license pretty much the moment I turned sixteen. The logic was that it would eliminate the need for me to beg rides home from friends’ parents after all my extracurricular activities, as well as allow me to run to the grocery store and help out with other chores that my dad otherwise couldn’t take care of until he was able to commute home from his job in downtown Chicago. And, yes, of course, being dutiful and obsequious to a fault (as I learned to be as a survival tactic in my family system), I ran plenty of errands and drove my siblings to and from their own extracurricular activities. But I was also suddenly…free. Free to exhale all the parts of my personality that I otherwise felt like I had to repress in order to make myself the model student, the model daughter. I now had the means to call the shots, and to build my own little motley society in the car with me.

Between the ages of 16 and 18, and even after that when I was home from college for summer and winter breaks, that car felt like my everything. It was the place where I listened to my favorite music (and sang along to it, loudly), exchanged heartfelt confidences with my dearest friends, made out for hours with my boyfriend, and wolfed down fast food on my way home from late-night theater rehearsals.

With gas prices still being relatively reasonable in the mid/late ’90s, I would often also just drive for the sake of driving.

I’d pick an arbitrary destination (often just some wide-open stretch along southbound Route 41 where it was easy to do a U-turn and head back home again), and I’d revel in the sense of purposeful aimlessness. I’d listen to music and allow my brain to simmer down from whatever full-throttle obsession it might have gotten stuck in, whether related to friends or family or school or my seemingly unreachable general ambitions. In these days before I’d developed a more formalized meditation practice, driving was the surest way I knew to connect with an expansive grace and a neutral yet observant regard for the world around me.

I lived with my maternal grandmother for about six months right after I graduated from college (which you can read more about in my brand-new zine, Loose Ends and Loneliness), and in the last hasty update to her will that she made right before she died, she left me her burgundy Cadillac Eldorado. It was a hell of a gorgeous car that made old men weak in the knees whenever they saw me in it on the street. I dutifully registered it with the city of Chicago when I finally, officially moved here on September 2, 2002. It mostly sat, though, undriven, in the space I paid for behind my first apartment near the corner of Chicago & Damen. I found that the CTA was easier to negotiate on a daily basis and that it offered, actually, more opportunity to develop that empty-minded meditative expansiveness than the stresses of city driving did. So, I eventually had to admit it was wisest to pass the car along to my brother, who needed a more reliable set of wheels for himself at that point anyway.

Thus my mobile meditations were then transferred to the trains and busses of the city, as well as my favorite paths to walk through the neighborhoods where I lived, worked, and explored. 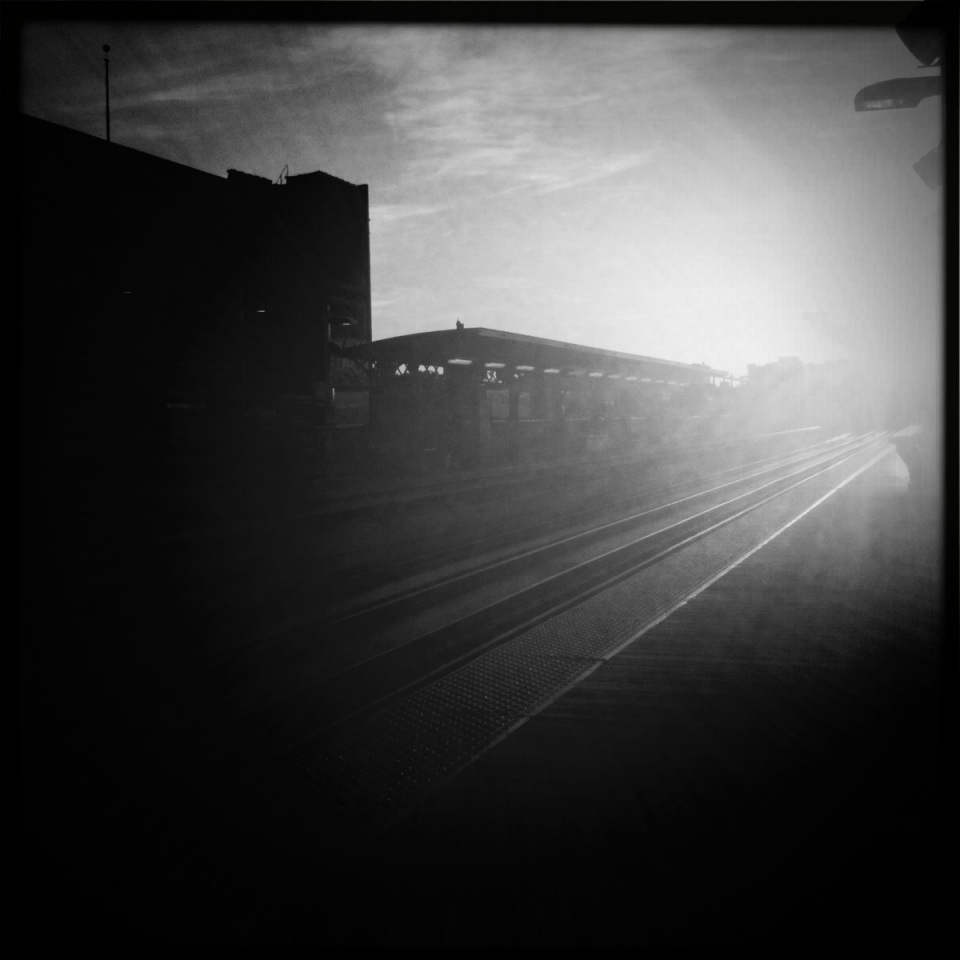 But I still get a surge of excitement once I’m in a car on the open road—whether that’s a simple spin down Lake Shore Drive headed to Hyde Park for the day, or a longer trek outside the city for one reason or another. On especially gorgeous evenings, when the sky is full of pink clouds and the music on the stereo sounds just right and the miles are uninterrupted by gridlocked traffic, my love of the road will get the better of me, and I’ll shriek impulsively to my boyfriend, “let’s gooooooo! Let’s drive to Milwaukee!!” 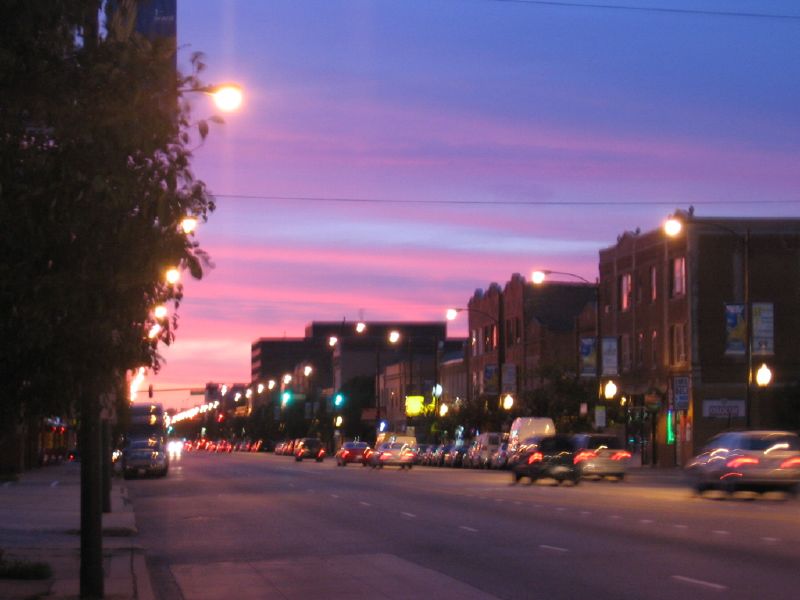 We, um, don’t, what with cats to attend to and more rigidly booked schedules to maintain and astronomical gas prices to be mindful of. But like anyone with a lapsed religious practice, my early, formative experiences of life on the road continue to color the ways that I most intimately understand myself, moving me forward even when I’m sometimes, often, not exactly sure where I’m going.

You can join my mailing list here. If you are a writer, musician, or other creative type and are looking for some insight on your work, click here to find out more about my psychic services for creatives.

← The Smell of Wet Wood
The Perfect Cupcake →