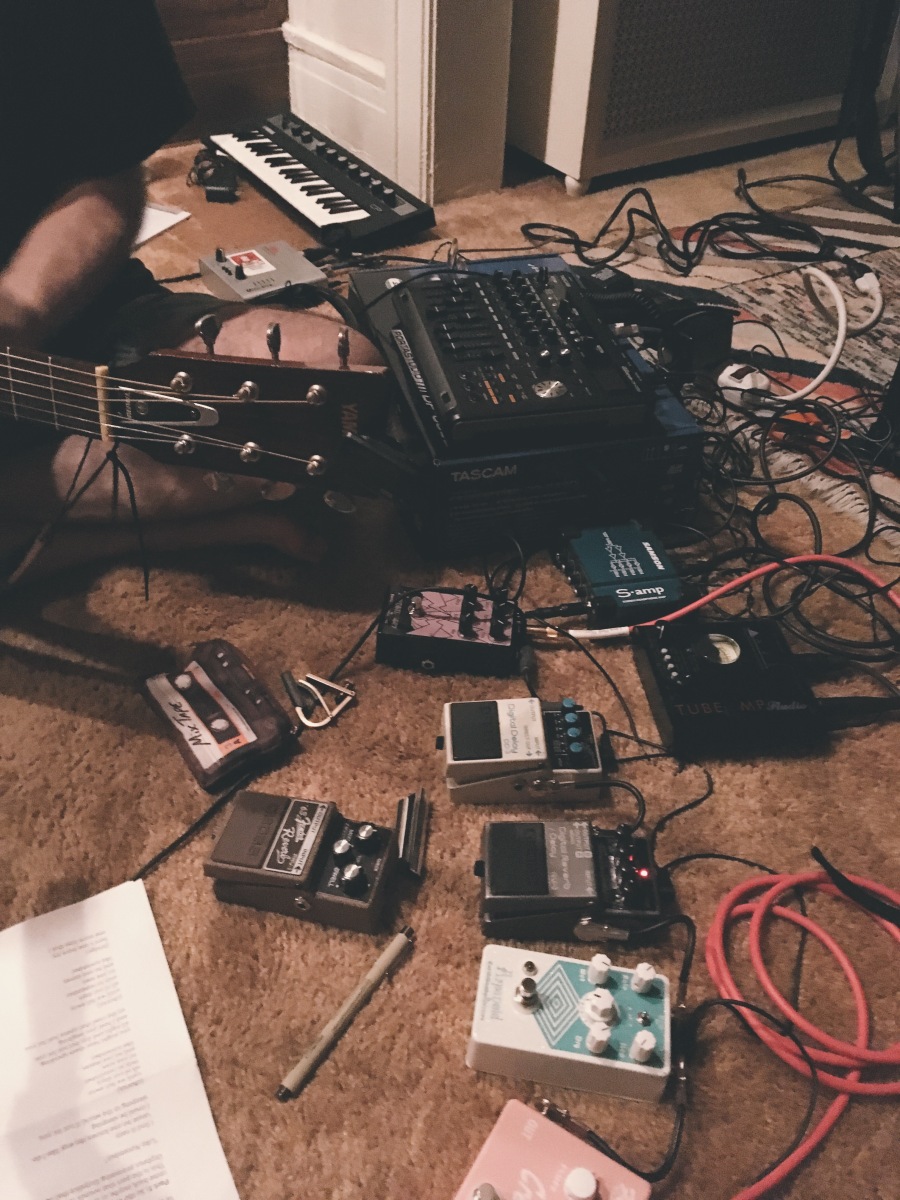 One of the best possible examples that my dad set for me, as a creative person, growing up, was that he collaborated with people.

As I’ve talked about before, it’s hard to explain exactly what kind of musician he was. But the one thing he definitely wasn’t was the stereotype of the isolated solo artist, tortured by the melodies in his head that no one else could hear, pushing people away while he perfected his craft.

Was he a monomaniacal, controlling, obsessive, perfectionist Virgo? Yes. It was his way or the highway, especially if he felt like you weren’t on his level, professionally. He would damn well tell you how the part should be played, how the song should be sung, how the arrangement should be arranged.

But if he respected you as a musician? He actively wanted to collaborate and play together. He was a band guy through and through. Whether it was his trio, a musical theater pit band, or the praise-and-worship musicians at church, he wanted your opinion. He wanted your voice. He wanted your talent. He loved and respected his musical friends with the enthusiasm and ferocity of his entire being. He was not shy about expressing his admiration if there was anything he liked about someone’s technique or style.

For better or for worse, when I was a child, he often treated me like a tiny adult, like his little musical protégé. It’s hard for me to say for certain now, as an actual adult, how much of my musical talent and musical interest was innate and specific to me, and how much of it was just that I learned very quickly that I would be praised and rewarded for demonstrating musical aptitude. Not that it matters much at this point; you can’t unring a bell, as they say, and I’m grateful for the inadvertent musical boot camp that I went through in the years before I turned eighteen. But when I take personality assessment inventories or try to work through journaling prompts that suggest I think back to the stuff that I most loved doing as a child in order to determine where I might find greater joy as an adult, it’s hard for me to untangle the threads of how much pleasure I gleaned from music in and of itself and how much I just wanted to feel like I belonged to something—such as the not-so-secret club of musicians that my dad spent a lifetime gathering around himself. Of course it’s natural for a child to seek a parent’s praise; his was just particularly high octane, especially when it came to his area of expertise.

I would cringe with shame bordering on terror when I botched something while I was still learning to play the piano—not so much because I thought he was going to yell at me (since he was trained as a teacher, he could actually be very gentle with beginners, despite his temper), but more because I hated revealing myself as, frankly, a child. He treated me more or less like a peer, so I put a lot of pressure on myself to rise to the occasion.

I remember once excitedly wanting to play for him a piece that I’d recently taught myself from a book of sheet music. The time signature was 4/4, but somehow I ended up miscounting some of the syncopation, which meant I was playing a few bars in something like 7/4. I was so impressed with myself when I sat down on the piano bench, and then gutted when, in the middle of the song, he straight up laughed at me.

In retrospect, I’m guessing that his laughter wasn’t meant to be derisive. In a weird way, it was probably even tinged with respect, since, how in the hell does some preteen piano-playing kid just accidentally end up bashing through something in relatively consistent 7/4 time? But I was instantly flooded with shame. (I am not a shrug-and-get-over-it kind of person. I go instantly to shame and I wallow there.) I’d revealed myself to be an amateur. I’d overestimated my own abilities and then had been given my comeuppance. He immediately sat down and showed me how those measures should be played, but it hardly mattered. By that point, I hated the song; I hated myself. I was clearly deficient. I should have known better. I should have been better if I wanted to be part of his beloved inner circle.

Luckily, though, since my dad never thought of himself as much of a singer (for as gifted as he was in so many ways, he was a lackluster harmonizer and his tenor range was limited), and since I actually loved to sing, that became an easier dynamic for me to inhabit. Him at the piano, me standing behind his shoulder, the two of us reading the music together, working as a team, as something approaching equals.

I felt less shy about asking for his help in that capacity, asking for him to count me out a rhythm or asking for a suggestion for how to finesse the feel of a certain idiom. Though there were many, many fraught aspects of my childhood, especially after my mom’s death when the stresses of single parenting made his already hair-trigger temper extra sensitive, there was also a lot of joy. And filling the living room with music, often just for the sake of amusing ourselves, was the surest way to create and sustain that joy.

In my 20s, when I went through a long stretch of being single and would moan about it absolutely any chance I got, a friend once tried to cheer me up by telling me that she could imagine me ending up with a music teacher. “I could really see you with some cool young music teacher who plays guitar.” I inwardly cringed when she said it, thinking, oh god no, I don’t want to be the cliché of the person who ends up dating someone who resembles her own parent, subconsciously attempting to replicate the familiarity of her early childhood imprinting.

But on the other hand…yeah. It had always been easy for me to gravitate to creative people of all disciplines. It never surprised me to meet people in some totally square context and then discover that they could shred on a Flying V guitar, that they had won piano competitions as a child prodigy, that they were semi-professional stage actors on nights and weekends, that they had an MFA in photography. Those were just my people. I found them, they found me, we routinely found each other. And I just expected it. It seemed second nature to me after the example that my dad had set with his crew. I also couldn’t deny the appeal of getting back to a life where I could share and collaborate on music as a matter of course; this time, though, hopefully a little bit more on my own terms.

Happily, the past six years of my life have been just that, thanks to Brian, my perfect cupcake, a guitar-playing teacher after all. Our most recent co-creation is the soundtrack to our friend Gene Kannenberg Jr.’s asemic graphic novella Qodèxx.

What is an asemic graphic novella, you ask? Feast your eyes (and make a purchase) here. Qodèxx has been praised as a masterpiece by none other than Emil Ferris, author of the hugely popular and successful graphic novel My Favorite Thing Is Monsters, and has also recently been featured on Nebraska Public Radio.

On Saturday, July 29, Brian and I will be playing a 20-minute-long set of completely new and original music at the Qodèxx release party in front of a slide show projection of the interior illustrations from the novella, almost like the organ accompaniment to a silent movie. A full downloadable recording and a physical CD will subsequently be made available as well. (Think of it as the contemporary version of a Power Records book-and-record set.)

Brian and I have spent the past month working through the songs together, bolstering each other’s weak spots and leaving plenty of space for each other’s strengths. Learning any new song is always still frustrating for me; I just want to know it already, to be well into the meat of the thing, where the real magic can start to take shape. So though the days spent hashing out the arrangements were necessary, and satisfying in their own way, it was once we’d gotten the basic parts nailed down and then started tearing them apart again that my spirits truly began to soar.

For several days, we fell into a delirious, delicious routine, where I’d come home from my 9 to 5 day gig to find Brian sitting on the living room floor, hunched over the digital recorder, brows furrowed in concentration, headphones on his ears, surrounded by guitar pedals and other miscellaneous gear.

After listening through what he’d spent the afternoon recording on his own, we’d have a bit of dinner and then get right back to the music. I’d track a vocal line, he’d ask if I could invent a harmony, we’d play through everything a few times and smooth over any rough bits, and suddenly full-blown arrangements existed where there’d once only been acoustic sketches.

As my life feels increasingly fragmented by all the identities and duties that impinge upon me, from work to family to friends to my own health and even meditation practices, it was thrilling to get to concentrate so intensely on one thing for hours at a time, several days in a row. How does this sound? Can we make it better? What should it sound like? Can we simplify it even further? Even our cat Rosie knew something special was happening in the living room and would sit quietly with us, more peaceful than she almost ever is.

There is a quality of listening that activates in my head when I’m deeply engaged with musical creation and evaluation with someone I trust, approaching that vaunted state of flow, where I’m momentarily free from shame.

About the Qodèxx Happening at Creative Coworking in Evanston, click here.

Category: Behind the ScenesTags: DIY, music, my dad, recording