Spirits in the Material World

Looking for My Sublime Tribe

It’s hard for me to be out about my psychic skills and spirituality in my everyday life.

Despite the current trend toward all things witchy and woo, it’s a trend that I mostly see and participate in online. With definite exceptions, it’s not especially reflected in my daily friendships and associations.

Though many of my oldest and closest friends are intensely spiritual, their spirituality is often centered around Christianity. And though there are many aspects of Christianity that I still resonate with—particularly when it comes to social justice—I personally have always felt more drawn to Eastern philosophies and mysticism. Which, living in Northwest Indiana until my early twenties, meant that I gained most of my information about these traditions through books.

After I moved to Chicago, I certainly had more and better access to all kinds of Buddhist temples and meditation centers, and eventually felt myself pulled toward expanding my psychic abilities, learning reiki healing, and working with crystals. Recently I’ve also been devouring Doreen Virtue’s books on angels, goddesses, and fairies; Sera Beak’s impassioned explorations of the (re)emerging Divine Feminine; Serge Kahili King’s wonderful writing on the Hawaiian Huna tradition; and the idea of “core shamanism” as defined by Tom Cowan in his excellent book Shamanism as a Spiritual Practice for Daily Life.

Even in a big city with so much to offer, though, why is it that so much of my knowledge is still mostly gleaned from the written word? My stereotypically Aquarian standoffishness is not particularly well served by the intense intellectualization that comes from so much reading without being able to integrate all that new information into my physical body in the context of any kind of long-term community.

And even when I do attempt to engage with other like-minded folks, it either tends to be online (such as Drucilla Pettibone’s Faericology course) or extremely short-term (such as a weekend workshop at Chicago’s Equilibrium). These are better than nothing, of course, but don’t exactly do much to combat my brain-in-a-jar tendencies.

I supposed this furtive behavior is also somewhat compounded by my irrational fear of being judged by the handful of scientific brainiacs and atheist intellectuals I also count among my friends. Whether it’s the brilliant editors at my day job or casual acquaintances who work at science labs or as university professors, I often find myself in a mild panic when I consider what they might think of me if they ever found out I give aura readings, connect energetically with the faery realm, or occasionally communicate with spirits who have passed away from this physical plane. 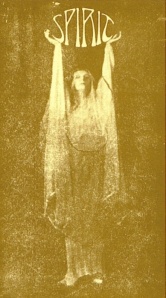 Part of my difficulty here stems from my inability to reconcile my intense spiritual longings with my equally intense curiosity about the hard sciences. As a middle schooler, I remember sitting through science classes and thinking, “why aren’t science teachers and scientists the most religious people in the world?” The extraordinary wonder of the natural world just seemed too beautiful to be approached with anything other than complete reverence. As an adult, I still do believe that privately, but often want to hang a gigantic asterisk over my head to inform all my techno-pals, “yes, I may give aura readings, and yes, I may be intensely in tune with the energy of people, places, and things, but I’m not some sort of floaty, brainless starchild. I stand by the scientific method, too!”

I know it’s not an all or nothing proposition, and I know that I should trust other people’s capacity to enjoy my company while disagreeing with me at the same time. But this is where I feel my lack of community most keenly. In wanting to be accepted by any sort of larger group, I’m essentially willing to hide or minimize the parts of myself that connect me with the largeness of the sublime.